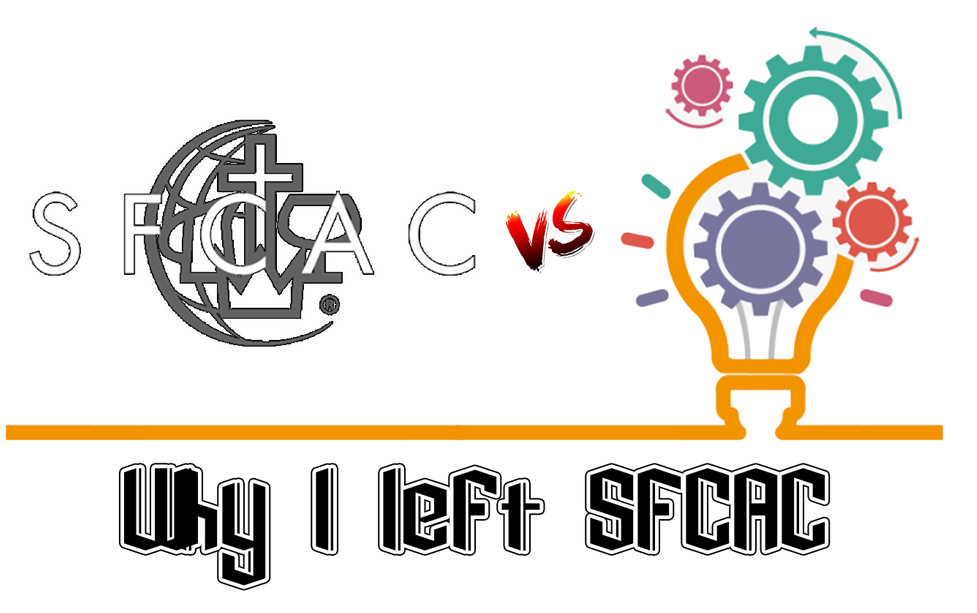 Why I left SFCAC (and what led my abrupt departure)

It’s been seven years since I have parted ways with San Francisco Chinese Alliance Church back in July 2015, and while I must admit that part of me missed the company with some of the fellows within the fellowship and some of the churchgoers, there are a certain aspects of the church administration, whether it’s with the office or certain aspects of a certain fellowship, that I wasn’t aware of and prepared for when I first joined them in late 2010 during my utterly cataclysmic attempts in support of my then-girlfriend-and-fiancée of then-8 years from Changsha, China by trusting the wrong associates who turned out to be internet scammers who pretended to look for a life partner. Perhaps I was too naive about getting involved with a fellowship, it was never my intention to cause harms and conflicts with everyone in the group as I have considered them as my extended family. I am certain that there may have been a few questions popping up with those within the fellowship and embers of the church upon this article getting published via social media, as such, I believe that this is the right time and place to tell the truth about my abrupt departure, whether my fury has subsided long enough for returning without experiencing another relapse, and why I may never be the same if and when I return to any church in San Francisco.

Before I explain what happened, I must emphasize that not all of my views that led to my departure equates from others who had also left that church before me, after all, nobody is perfect; however, there are a line where a person’s tolerance is deemed acceptable and, as a consequence, have decided to reevaluate my own life while still trying to discover what exactly is my function in remaining life that I have on this world. I’m fine with some may not accept the explanation, but mark my words, I no longer tolerate any unjustly questioning of my motivation for my actions as I am more of a simpleton than a mad scientist who lost all of my sanity, as well as leading me into a dark path of driven my life into the deepest of all conspiracy theories, I kid you bloody not.

First, I have always been interested in doing audio works as, at the time that I made my decision to help out with the audio control panels, for I had once studied broadcasting more than a dozen years ago at that point in time, it was fulfilling a promise that I once made when I went to another church within a few blocks from my house years ago, and despite the fact that my studying of the production was rather elementary, I was willing to put my efforts into it. Whether I have succeeded or not, I didn’t care as long as I made the effort, regardless of what other people thought, I want in. It’s that bloody simple. For the first year or two, I was learning the craft as a preparation for my own understanding on perhaps doing my own production in my home. Then, as I was learning to operate the setup, I must have noticed that a certain aspects of presentations that would require much more efforts than what they had done before, specifically to do with their PowerPoint presentation, as such, I took it as a long-term challenge to perfect what they had done before. However, much like my failed relationship relationship with my then-girlfriend in an attempt to bring her to the stateside, the opposition against my involvement was brewing just as quickly; yet I was that determined to get it right, whether they appreciate it or not. Then came one day in late May or early June 2015 when all my efforts went to waste in one fell swoop, as an edict was delivered to me via email that “the only version that is ‘acceptable’ is one from the senior partner within the fellowship” about a week or two after I was told with such quotes like “why the hell would you change it at all?” This pissed me off to no end, and more I tried to convince them to accept the one-off attempt, more they were hellbent to exclude my efforts, as a result, I once went to church on one Friday for the sole intention of keeping myself in the dark, and it was that night I realized that nobody wanted me around anymore by not even spending time to discuss that issue with me face-to-face. From that point on, I am seething with my wrathfulness and it is burning up even now than it first glow, as I could never forgive for the person who screw over my efforts by claiming it was “garbage,” and here’s the worst part, I have once specifically told them that I could only do the PowerPoint remotely due to my acceptance of new assignment in my workplace at Kaiser Permanente from a “desk jockey” to a frontline worker, which made me even more incensed as someone’s decision made me looking stupid. As a consequence, I told one of the members who occasionally contacted me that “I will not come back until they have resolved what they expected from my duty within the fellowship” in such point blank declaration, and I have kept that promise, without any regrets, of not returning until a major change is made.

It’s been seven years since I have parted ways with San Francisco Chinese Alliance Church back in July 2015, and while I must admit that part of me missed the company with some of the fellows within the fellowship and some of the churchgoers, there are a certain aspects of…

It’s been seven years since I have parted ways with San Francisco Chinese Alliance Church back in July 2015, and while I must admit that part of me missed the company with some of the fellows within the fellowship and some of the churchgoers, there are a certain aspects of…