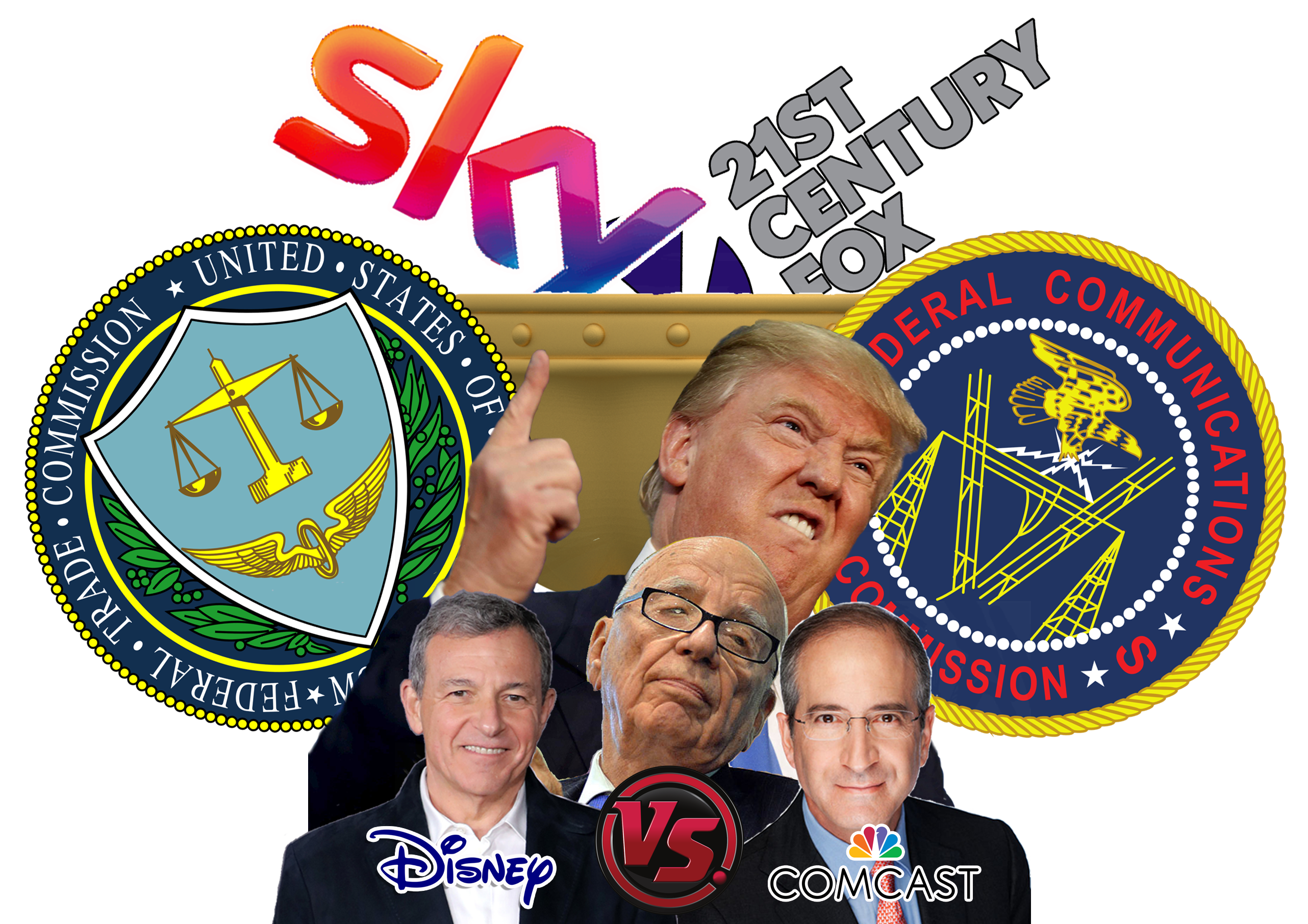 Why Are Disney and Comcast Battling Over Fox and Sky?: QuickTake (via Bloomberg.com)

What began as a simple bid in late 2016 by Rupert Murdoch’s 21st Century Fox Inc. for the part of Sky Plc it doesn’t already own sparked a transcontinental bidding war when Walt Disney Co. and Comcast Corp. joined the chase for Sky, a British broadcaster. Now Fox finds itself in a tug-of-war between rival bidders, Disney and Comcast, as a rapidly shifting media landscape propels one of the more intriguing global media battles in decades. When AT&T Inc. won antitrust clearance to buy Time Warner Inc., and the last U.K. regulator signed off on Murdoch’s Sky bid (with one big condition), the endgame seemed near. Yet the outcome is still very much up in the air.

Two entertainment giants, Disney and Comcast, are fighting over Fox and Sky for one big reason: internet streaming. Movies, TV shows and other entertainment offered by Netflix Inc., Amazon.com Inc. and Hulu have grown so popular that Americans are abandoning cable-TV subscriptions in droves, eating into media companies’ profits. Owning Fox would give Comcast or Disney iconic entertainment assets — from “The Simpsons” to the “X-Men” franchise — that would make their own streaming TV services more compelling. Fox’s 30 percent stake in Hulu would also give Comcast or Disney majority ownership over one of the few real Netflix competitors, since each already owns 30 percent of Hulu.

2. Why is Sky getting so much attention?

Sky’s 23 million customers in five European countries would give Comcast or Disney a rare opportunity to diversify out of the U.S. and reach more consumers directly. Sky boasts a market-leading platform, its Q box, which Comcast Chief Executive Officer Brian Roberts says leaves him “terribly impressed.” Sky also has a suite of sought-after TV content to lure and retain subscribers, including rights to Premier League soccer. Of the assets he’s seeking to acquire from Fox, Disney CEO Bob Iger called Sky “a real crown jewel.”

U.K. Culture Secretary Matt Hancock on June 5 approved Fox’s takeover of Sky, provided Fox sells Sky News. Murdoch, 87, already had proposed selling Sky to Disney, as part of his second attempt to buy the 61 percent of Sky he doesn’t already own. At first, Fox estimated that its Sky deal would close by the end of 2017. But the process was delayed by allegations of racial and sexual harassment at Fox News — probes of which the company has since cleared.

The Murdoch family wants to sell some of the global empire it assembled over three decades. On June 20, Disney sweetened its bid for the Fox assets to $71.3 billion in cash and stock, up from $52.4 billion. The deal, which Fox has accepted, would include the 20th Century Fox movie and TV production house, Star India, a lineup of U.S. cable channels that include FX and National Geographic, and the 39 percent stake in Sky. Disney raised its bid — it will also assume almost $14 billion of Fox’s debt — in hopes of beating rival bidder Comcast’s $65 billion offer. Fox prefers Disney because it considers Disney’s stock more valuable and it worries that a deal with Comcast would meet regulatory snags.

5. What happens next with Sky?

With the U.K. government’s approval for Fox to buy Sky, Fox’s board must decide whether to make a new offer. As it stands, Comcast’s bid of 12.50 pounds ($16.71) a share is at a premium to Fox’s 10.75 pounds a share. A higher bid would come with complications, though. As part of the Disney-Fox merger agreement, Fox would need Disney’s consent to boost its offer. To keep things simple, Disney might be tempted to make its own outright bid for Sky.

6. What are the regulatory snags?

Comcast waited to make a formal bid until the fate of another so-called vertical deal, combining programming and distribution powerhouses, was decided: AT&T’s attempt to acquire Time Warner, which the Justice Department had tried to block on antitrust grounds. When a federal judge ruled against the U.S., Comcast had fewer reasons to fear similar treatmentfor its bid for Fox, though the Justice Department could still intervene.

Comcast is likely to come back with a response to Disney’s offer, which could further escalate the bidding war. But if Comcast walks away, it may focus instead on its efforts to secure Sky — or pursue another entertainment property, such as Sony Pictures Entertainment.

8. What about the Murdoch dynasty?

The family will still rule over a broadcast network, a cable sports channel, a business news channel and Fox News. The Murdoch family separately controls News Corp., which aside from British newspaper holdings also owns the Wall Street Journal and the book publisher, HarperCollins. The Murdochs in addition would hold a stake of more than 4 percent in Disney, ranking them among the largest shareholders.

— With assistance by Samuel Dodge

By Joe Mayes and Gerry Smith

What began as a simple bid in late 2016 by Rupert Murdoch’s 21st Century Fox Inc. for the part of Sky Plc it doesn’t already own sparked a transcontinental bidding war when Walt Disney Co. and Comcast Corp. joined the chase for Sky, a British broadcaster. Now Fox finds itself…

What began as a simple bid in late 2016 by Rupert Murdoch’s 21st Century Fox Inc. for the part of Sky Plc it doesn’t already own sparked a transcontinental bidding war when Walt Disney Co. and Comcast Corp. joined the chase for Sky, a British broadcaster. Now Fox finds itself…

3 thoughts on “Why Are Disney and Comcast Battling Over Fox and Sky?: QuickTake (via Bloomberg.com)”