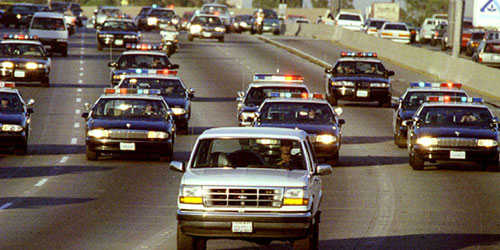 In any given day, all sorts of events happen around our everyday lives, and some impact our thoughts more extensively than others.  To the point that it becomes quite a trivial question of “where were you w

hen such event happened?” From a personal standpoint, the one day of the calendar that stands out the most in the last 20 years has to be one on June 17, 1994.  What made that day so much more significant to me than any other day?  The reason was very simple, I was one of those people who were involuntary caught into one of the most significant piece of history during a time that there were other events, particularly with several sporting events, that occurred on the same day.  That day was also significant in a  personal standpoint as it was just 24 hours earlier that I had graduated from Lincoln High School in San Francisco as part of Class of 1994, and it was supposed to be a cheerful day but ended up wasn’t because one particularly criminal investigation against a well-known sports personality who, until that point in time was on television on NBC Sports with Bob Costas for the NFL broadcast, became the subject of the double murder case of his ex-wife Nicole Brown Simpson, and her friend Ronald Goldman.  As the week progressed while I was preparing for my high school graduation, the attention of the world – myself included – began to shift towards, and later overshadowed, by one O. J. Simpson instead of everything else that had been happening on the same day, and then for months and years after.  Rather than focusing the joy of having hosted the first World Cup in the United States soil, watching the chase of then-record single-season home run of Babe Ruth by the likes of Matt Williams, Barry Bonds and Ken Griffrey Jr., or the New York Rangers Stanley Cup victory parade, or even the celebration of my older cousin’s graduation at UCLA, all eyes and focus were on what happened on that day.  Twenty years on, for the first time perhaps ever – if anyone who hasn’t heard about it for the first time – I am telling you the parallel story of what happened on that particularly fateful day that was on June 17, 1994.

Before I began this memoir though, this article came about after watching an ESPN film of the same title for about 3 times, and since I have been doing quite a bit of retrospectives in this blog anyway, why not add the mother of all retrospective of this fateful day.  So here’s a quick rundown on what happened around the world – in parallel with the O. J. Simpson case – earlier in that week while I was rehearsing my high school graduation, although most of the events are heavily tilted towards sports:

So with that heavy background were established, then the series of events on that fateful day, June 17, 1994,  were about to occur throughout the day.  Early in that morning, I woke up and had breakfast before awaiting my other cousin Donny Wong arrived at my house in preparation to head out to Los Angeles.  Soon after a few moments after setting up the bags into the trunk, my family – which included mom, dad, my beloved and sorely missed grandfather (mom’s father), and myself – were on our way to Los Angeles via a 9-hour drive on freeway.  At 9:00 AM, the first of series of many events occurred while we had just touched Interstate 5 toward southbound:

By the time Arnold Palmer had scored 81 in the Second Round of US Golf Open in his final appearance for that event (+16 for the tournament with 158 strokes for the two rounds), while the New York Rangers met with Mayor Rudolph Giuliani during the parade, and he made the comment of “Go Knicks!” in hopes of having a double championship in the city, we were at Fresno resting for meal before resuming the trip.  At that point in time, nobody in the family has heard the news as of yet, with all the while the world were glued to the television witnessing the unthinkable as O.J. Simpson, who was born in San Francisco and went to City College of San Francisco, to which it was an irony that I also went there soon after the L.A. trip.  It was also ironic that Arnold Palmer, who had befriended with Simpson and even made a commercial together, made his final US Open Golf tournament just as the latter were on the news headline of the worst sort.  Soon after, as we made our way towards Bakersfield for another stretch, Simpson had issued an apparent suicide note that was read by his attorneys Robert Kardashian (the birth father of Kim Kardashian-West) Robert Sharpiro, who made the plead to surrender during a press conference.

While World Cup match went on, so had Major League Baseball game between Kansas City Royals and Seattle Mariners at Kauffman Stadium, and Ken Griffrey had just hit his 30th home run before 6/30 off David Cone.  As the approach towards Los Angeles was near, Game 5 of the NBA finals was about to commence, and Simpson had finally made his appearance by entering Cowlings’ white Ford Bronco under rather low speed – while the former carried a firearm threatening with commit suicide during negotiation.  This is where the traffic game on I-5 became more apparent, and unfortunately, with the longer the chase continued as so many people had simply slowed down or parked on freeway, and began cheering on Simpson, my own mental instability due to my previously deep trauma that resulting a deep depression, began to surface for wishing death out of the blue as I began to feel the urge of going to restroom to pee.  My father, who still doesn’t know that my depression was that deep and scarred due to years of pressure, physical & emotional abuses, and loss of grandmother, yelled at me for going insane.  It was around 4:30 p.m., if not later, when it occurred.  I have glimpses of that fragility occurred before with anger management, but that was the first time I was truly losing my mind.  Fortunately, though, we had finally arrived at the motel that we were staying before that became worse.  Immediately after getting room keys, we dropped our luggage while I rushed to the restroom and made my deposit.  Soon after, I turned on the television inside the room and found out what happened in a split screen between the basketball game that was at halftime and the news on Simpson.  About two hours after as we went to a nearby restaurant for dinner, the Knicks had taken Game 5 and the series lead while the Simpson drama was heading toward its conclusion as he finally surrendered to LAPD – but not until after even more media coverage.  As for me, the Simpson chase had essentially spoiled my mode on the trip for the rest of the way.  While I remembered going to Jimmy Wong’s graduation at UCLA, the trips to Universal Studios in Hollywood, San Diego Animal Park, and Disneyland, but my focus was essentially capsized towards the Simpson’s case.  By the time we’ve returned home a few days later, O.J. Simpson and his murder case remained under that spotlight for quite some time – even after the World Cup was over with Brazil winning the tournament in honor of their countryman by the name of Aryton Senna (that would be written on another article on another blog at another time), who was tragically killed in a crash during that year’s Formula One San Marino Grand Prix at Imola just 2 1/2 months prior on May 1, 2014.

Even though it has been 20 years since that fateful day, the whole Simpson affair since 6/12/1994 have altered the perception towards celebrity in ways that it has become both a blessing and a curse.  For those who were caught into that, whether willing or otherwise, knowingly or otherwise, their lives have been altered dramatically.  On a personal standpoint, once again, that literally altered my thought process in more ways than one; unfortunately, some of those thoughts have become the sorts of nightmares and calamity that have taken a huge toll on my personal life and my career alike.  Meanwhile, here’s a view of what have occurred in the sporting world since that day:

As for O.J. Simpson, while he was found not guilty in the criminal trial on October 5, 1995, he was found liable for the wrongful death suit in a civil trial.  Simpson was ordered to pay $33.5 million in damages, and almost all of his belongings were put in auction that all the proceeds went to the Goldman family.  The Goldman family’s endless pursuit further pushed Simpson’s finances from receiving any income since 2000 led to more legal trouble in Miami, and was eventually caught up with him after he was found guilty of committing robbery of the very memorabilia that Simpson once owned before his arrest and the first auction.  He will be granted parole in 2017, that is, assuming Fred Goldman would not object during the processing.  Otherwise, he might be staying in jail for even longer time.  As for the other individuals related to this affair, here’s what happened to them:

To this day, White Americans still maintain that Simpson was guilty while the polar opposite was true in the opinions of African Americans.  In my opinion, I don’t think we’ll really know for sure what really happened on that evening of the murder, or who really did the crime until some years or decades after if further DNA testing can be done to debunk the myths and establish facts for this case.  The reason is simple: someone might actually be taking the truth to the grave, whether it is Simpson himself, Cowlings, or anyone who may had been there around the neighborhood.

As for Formula One, that’ll be another topic for another blog.  Stay tuned.  Baseball wise, I’m still as big of a fan as back then. It’s just that it’s competing my time to watch as I’m also following rugby union, rugby league, soccer, and above mentioned F1, alongside with audio podcast, and Bible study.  As for my depression, to put it bluntly, it’s not just as simple as “work in progress”, as my traumas I have suffered over the years were so stacked and intense, that I’ve resulted in going to a weekly psychotherapy session.  As for World Cup and things about soccer, stay tuned.

In any given day, all sorts of events happen around our everyday lives, and some impact our thoughts more extensively than others.  To the point that it becomes quite a trivial question of “where were you when such event happened?” From a personal standpoint, the one day of the calendar that stands out the most…

In any given day, all sorts of events happen around our everyday lives, and some impact our thoughts more extensively than others.  To the point that it becomes quite a trivial question of “where were you when such event happened?” From a personal standpoint, the one day of the calendar that stands out the most…

The Political Garbage Chute | A Politcalocalypse!