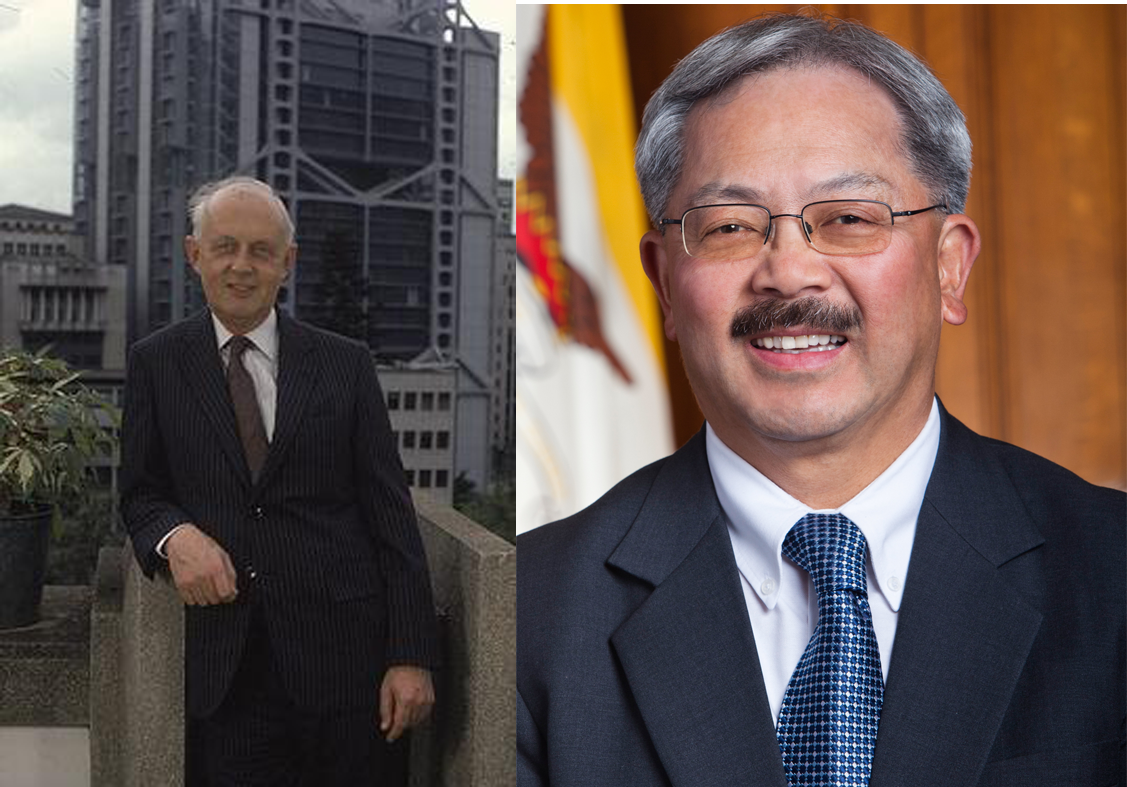 Editor’s note: The article below was published in error as a page section, so I’ve transposed the entire article into the blog section.  Sorry about the confusion.

This is a special op-ed that I found myself writing in the aftermath of San Francisco Major Ed Lee (李孟賢)’s passing in the early hours of December 12, 2017 after suffering a fatal cardiac arrest during his shopping trip at a Safeway store in Diamond Heights neighborhood.  While I am in no part of inside of Lee’s political camp, never mind that I am not necessary too active in politics even though I have a knack in making political commentaries every now and then, this shocking news somehow draws me in this perspective: If I remember correctly, there have been a handful of politicians around the world who passed away while in office, and Lee’s passing reminds me of another politician’s passing when I was nearly 11 years old, his name was Sir Edward Youde (尤德爵士), a Welsh-born British administrator who became third-to-last Governor of then-British colony of Hong Kong from May 20,1982 until his passing on December 5, 1986. Like Lee earlier this morning, Youde’s passing during the Sino-British Joint Declaration and post-declaration negotiation since 1984 in related to the future of Hong Kong when he too suffered a fatal heart attack in the British Embassy at Beijing, China in the early hours of December 5, 1986.  As far-fetched as it may sound, they both died in December though there’s a 31-year-1-week gap in between, while detractors on both men claimed that they have caused irreparible harms towards the city they had been administrated in, with Youde’s inability to express concerns from the people of Hong Kong during the Basic Law drafting negotiation, and Lee’s constant struggle against those who didn’t believe his vision of the city in terms of housing market crisis including the “gentification” of certain neighborhoods, constant constructions that cause numbers of commuting issues, and much-criticized by conservative media and “President” Donald Trump with regards to “sanctuary city” status for, one must admit that it’s not as if they haven’t really tried to alleviate the issues at hand.

In Youde’s case, he was dealt with a near-impossible task of attempting to provide a better political transition for the people of Hong Kong, much to the annoyance and arrogance of China’s leadership as the Chinese Communist Party has never recognized the Sovereignty of Hong Kong under British rule by rescinding all of the unfair treaties that were signed by the latter stages of Qing Dynasty, never mind him and the people of Hong Kong who frankly had been disgusted by the actions of the Party during the 1967 riot and the damage to the traditional Chinese history and culture that were deemed as “elitism” during the Cultural Revolution.  In fact, Youde survived the onslaught on the frigate HMS Amethyst that were assaulted by the People Liberation Army; if not for his language skills in Mandarin Chinese by negotiating with the PLA commander for their releases, he wouldn’t even had a sniff at the governorship of Hong Kong at all, never mind being apoointed a Member of Order of the British Empire (OBE) for his actions.

As for Ed Lee, his serving to the city began as a whistleblower ordinance investigator and the Deputy Director of Employment Relations for almost 3 years, which coincided (I presumed) my arrival in San Francisco in the middle of 1989, after a decade long stint with San Francisco Asian Law Caucus.  After serving in various department as director, he was elected as mayor of San Francisco in a hard-fought voting by city’s supervisors who initially not received the necessary six votes at a meeting of the board on January 4, 2011, the vacancy occurred as now-Lieutanent Governor Gavin Newsom was elected into the position.  He oversaw the implementation of raising minimum wage towards living wage level, a revitalization of Mid-Market area nearby Civic Center that brought in a few well-known companies such as Twitter, Uber and Dolby in spite of certain opposition by local communities, particularly that from the Tenerloin, the construction of “much-maligned” Central Subway project that was spawned by the aftermath of Loma Prieta Earthquake that I, amongst at least 5 millions who lived in the San Francisco Bay area at that ime,  unfortunately experienced it in person, initiated the creation of Housing Trust Fund in spite of facing issues of cheating in affordable housing selection process; in addition, he also oversaw the suspension of then-Sheriff Ross Mirkarimi, who was accused of domestic violence and other associated charged and alomst being removed from office, in 2012, and the infamous “murder” case against an illegal resident from Mexico for a fatal shooting of a female nearby areas between Ferry Building and Fisherman’s Wharf that garnered attentions from Trump and the conservative media with regards to immigration issues related to cases like it.

In summary, both men endured some of the most treacherous times in the cities where I grew up over the decades, and at least to my eyes, Lee drew a parallel path with Youke in spite of decades apart.  Hong Kong moved on after Youde’s passing with Sir David Wilson, who oversaw the Rose Garden Project for the Hong Kong International Airport on the island of Chek Lap Kok (赤鱲角), replacing Kai Tak Airport in spite of protest from China and the leftists in Hong Kong, at the helm.  As for San Francisco, we shall see how District 5 Supervisor London Breed, who had endured her own controversy on an FBI investigation into public corruption and bid-fixing claim that she was accused of being name as part of the allegation, handles the pressure and legacy left behind by him.

Editor’s note: The article below was published in error as a page section, so I’ve transposed the entire article into the blog section.  Sorry about the confusion.   JCN (12/13/2017) This is a special op-ed that I found myself writing in the aftermath of San Francisco Major Ed Lee (李孟賢)’s passing…

Editor’s note: The article below was published in error as a page section, so I’ve transposed the entire article into the blog section.  Sorry about the confusion.   JCN (12/13/2017) This is a special op-ed that I found myself writing in the aftermath of San Francisco Major Ed Lee (李孟賢)’s passing…

Omega vs. Jericho: Alpha vs. Omega